The Historic Women of Las Cruces

The Historic Women of Las Cruces

In celebration of Women’s History Month, we at Empowerment Congress have decided to honor the historical women who have impacted Las Cruces. Many strong women from the past have played essential roles in our communities across Dona Ana County. Here are just a few of their stories. 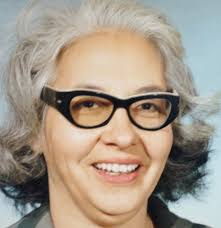 Maria Gutierrez Spencer was born in Las Cruces, New Mexico. Spencer was a dedicated educator. She was an excellent student herself; she was salutatorian for her 1933 Las Cruces High School graduating class. Spencer, went on to study at Riverside Junior College and Berkeley, where she majored in Spanish and Lain American history. In 1950 Spencer received her Master’s from New Mexico College of Agriculture and Mechanic Arts, now known as NMSU. Spencer was passionate about bilingual and bicultural education. She spent her years as a translator and Spanish teacher. Spencer worked in New York and California for some years before moving back to Las Cruces. She worked as a Spanish teacher for Las Cruces High for 15 years, innovating how Spanish was being taught. She separated non-native speakers and native speakers and worked with each group personally to meet their needs. Then after two years, the groups would merge. Spencer also took into consideration the students’ cultural experiences and used their understanding to develop a curriculum that met their needs. In 1967 Spencer would start to create the BOLD program (Bicultural Orientation and Language Development). This program assisted Spanish speaking students increase their education through the teaching of writing, science, and other subjects, all in Spanish. Along with ESL, this program supported the development of their self-esteem through exposure to leaders in their own culture. The program was a great success and won the Educational Pacesetter Award from the President’s National Advisory Council on Supplementary Center and Services in 1972. Spencer was an extraordinary educator and social justice advocate for her bilingual and bicultural education. 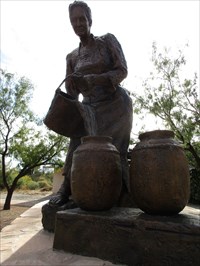 unclear. Although many believe the namesake references Doan Ana Robledo. Her actual name was Ana Gomez Robledo, and she was born in San Gabriel in 1604. She married Francisco Gomez, “who held every office of importance in New Mexico during his lifetime.” Many people referred to her as Dona Ana because of her age, stately manner, and knowledge. During the time of the Pueblo Revolt, Dona Ana was seventy-six years old. “She survived the siege of Santa Fe and traveled with the people as they fled northern New Mexico to the south.” She died crossing Jornada del Muerto, very near where her grandfather Pedro Robledo was buried. Pedro was the “first casualty of the Onate campaign, sent to colonize the upper Rio Grande valley.” The nearby mountains, which are known today as Robledo Mountain-Prehistoric Trackways Trail, were named after him. Dona Ana is buried below the peak of this mountain. 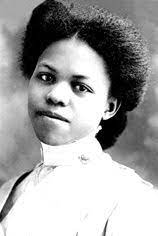 Clara Belle Drisdale Williams was the first African American to graduate from New Mexico College of Agriculture and Mechanic Arts (now NMSU). She was born in LaGrange, Texas. In 1901 she went to Prairie View Normal and Independent College (now Prairie View Agricultural and Mechanical University). Here she received a certificate of domestic arts and was the valedictorian in 1905. Williams moved to El Paso after and married Jasper Williams. They ran a drug store in El Paso. In 1924 Williams and her family moved to Las Cruces. During this time, she took an extension and correspondence class from the University of Chicago. In 1928 that is when Williams enrolled at NMSU. She was segregated from the classroom, was made to stand outside her classroom to listen to lectures and take notes while standing. At the age of 51, in 1937, Williams graduated from NMSU with a bachelor of arts in English. She was not allowed to participate in her graduation. Yet, despite it all, she still went back to school and took 12 hours of graduate work. After, William began teaching at “Booker T. Washington School in the racially segregated Las Cruce school system for twenty-seven years before retiring and moving to Chicago in 1951 to join her sons.” NMSU has since then apologized to Williams for her treatment during her time as a student. The university named a street near the campus Williams Avenue after the family. “In 1969, she was named to the Educational Hall of Fame by the New Mexico Education Association.” The university also named its English building after Williams and established the Clara Belle Williams Award Ceremony in her honor.

Gilbert was an educator, nutritionist, activist, and writer. She went to New Mexico Normal School 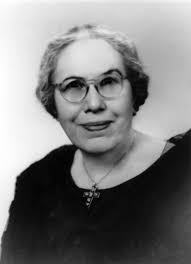 (New Mexico Highlands University) and earned her bachelor’s degree. In 1927 Gilbert enrolled in the New Mexico College of Agriculture and Mechanical Arts (NMSU), where she majored in home economics. During her time in college, she taught Spanish. Gilbert was asked by the Agricultural Extension Service Director, W.L. Elser, to work for the Extension Service. After she graduated, Gilbert joined the service and was a traveling extension agent for 30-years. Gilbert was the only Spanish-speaking female extension agent. As an agent, she taught Native American and farm women traditional and modern skills like gardening, cooking, and preserving their native foods. “In 1939, she published the extension circular titled Historic Cookery. A decade later, this became the heart of her acclaim to Hispano traditions and one of the most famous circulars published by a native New Mexican.” Gilbert’s recipe for tacos was the first recorded recipe for tacos that have been folded and fried. 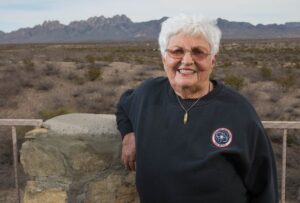 Frances Williams was born in Philadelphia, Pennsylvania but moved to New Mexico with her husband, who was transferred to White Sands Missile Range (WSMR). Williams had a 35-year career span at White Sands Missile Range. In her 35 years there, she held the following positions: supply systems analyst, logistician, director of administrative services for the Instrumentation Directorate, Federal Women’s Program manager, and Equal Employment Opportunity Directorate. From 1967-1968 Williams volunteered to go to Long Binh, Vietnam as a logistician. After returning from Vietnam in 1969, she became the first Federal Women’s Program coordinator at White Sands Missile Range. “In 1973, she became the first full-time Federal Women’s Program manager at WSMR. She started innovative programs to improve women’s employment status, not only at WSMR but also in neighboring communities. Williams has won many awards for her work in civil rights and equal opportunity. She was even selected as a delegate to the United Nations International Women’s Year in Mexico City from the Department of Defense. She was also chosen to represent New Mexico at the United States Conference for International Women’s year in Houston, Texas. Williams retired from WSMR in 1978 as the Equal Employment Opportunity Officer. Williams has since then established a consulting firm to help individuals seek equal employment opportunities. She was even inducted into the WSMR Hall of Fame and ran for Las Cruces mayor in 2003. “She continues to educate individuals and teaches civil rights classes for various public, and private sector employers, investigates complaints of discrimination, and serves as a technical expert in the area of civil rights.

Unfortunately, these women have been forgotten and their stories removed from history. So when we celebrate our wonderful women, we should also commemorate those we don’t know and those who have been pushed out of the women’s or local historical narratives. And as the women of our communities continue to do amazing things, EC will continue to lift up their stories and voices. We encourage everyone to join in the celebration of these women by listening to their stories and honoring their work because these women are the invisible fabric that hold our communities together.