Home/Community, Sunland Park/A Local David & Goliath Story: A Series Of Stories About The Fight To Keep The Community Of Anapra
Previous Next

Part Two: The Invisible Power Of A Voice

“It only takes one voice at the right pitch, to start an avalanche.” – Dianna Hardy

Taking that first step in a journey is one of the hardest things to do. There is bravery, strength, hope, doubt, fear, and confusion all in that one step. In part one, we talked about this first step. For years the community of Anapra had been struggling with the problem of stormwater flooding and relocation. Residents did not want to leave their beloved neighborhood. Instead, they wanted City leaders to find solutions that would allow them to save their community. Many residents and community leaders had grown tired of not seeing any real action. Maria Burciaga and Lorenzo Villescas, residents and community leaders, turned to the Empowerment Congress of Dona Ana in March 2018. The team at Empowerment Congress gave them resources and tools to organize for what Anapra needed. This was the dreaded first step.

From April thru September of 2018, the residents of Anapra and the Empowerment Congress team started attending the biweekly Sunland Park City Council meetings. There was one goal the community wished to achieve. They wanted City leaders to listen. Community members did something that many people don’t want to or don’t get to do, and that was to use their voice. The Empowerment Congress team went to the meetings to ensure that community members were heard and stood by for support. At these biweekly meetings, many residents gave public comments and testimonies. They advocated for a new stormwater pump and clearly state that Anapra remains a residential area in the Vision 2040 comprehensive plan. 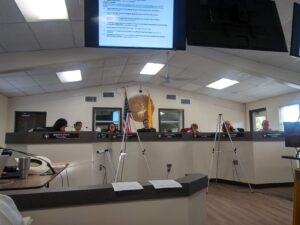 On June 28, 2018, there was a Sunland Park Planning and Zoning Commission meeting. Community leaders and members come out that day to use their voices as tools to bring justice. The Empowerment Congress team also came out that day in solidarity with the Anapra advocates and used their voice as an organization to bring awareness. Their demands were simple and real. We want to keep what we have worked for, and we need your help and honesty to do that. This message has always been clear. Those representing Anapra advocated for that at this planning and zoning meeting. Anapra community leaders, residents, and the Empowerment Congress team stood firm while facing City leaders. They held signs with the message “help Anapra” printed on the paper. There was tension in the air. Many of the city leaders indirectly and directly told community leaders that they were lying about having included the idea of relocating residents in the plans. The city leaders periodically interpreted those giving public testimony and stated that they didn’t want to “hear the same problem ten times.” This should have been a sign to city leaders that advocates of Anapra and the Empowerment Congress team were serious about this issue. This should have been a sign that this issue wasn’t something to place on the backburner. They would have to schedule a special meeting just to talk about the future of Anapra. Community advocates and the Empowerment Congress team did not back down, though they used their right to voice their opinion and used the appropriate space and time to address their concerns. This is the brilliance of community passion and dedication.

Not only were community leaders and members advocating to keep their homes, but they wanted the City to reflect that in their plans. After the City published its Vision 2040 plan online, many residents feared for their neighborhood’s future. On the project, the City had laid out Anapra as a potential park area, meaning they would relocate residents to make way. With the support of the Empowerment Congress, residents voiced their disapproval of this outline plan. In a story aired on KFOX14, June 28, 2018, Kevin Huckabee, the chairman of the Planning and Zoning Committee for the city of Sunland Park, stated they never planned on building a park and relocating residents. Kevin Huckabee told KFOX14, “the residents were concerned, and we have to try to address those when we can and try to rectify something if it was wrong, and that obviously, was a mistake, so we have to try to get it fixed.” If they never actually wanted to use the land to make a park, why bother having presented in the first place? 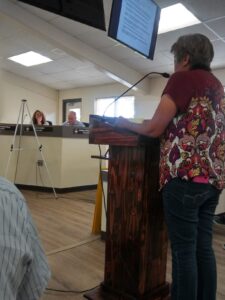 The city claimed the wording was a mistake, just a misunderstanding. This mistake caused a lot of stress, confusion, fear, and exhaustion for the residents in Anapra. They demanded clarification of the plan. Mr. Huckabee proposed a motion; the purpose was to consider the residents’ concerns and revisit the Vision 2040 plan. The commission voted to approve the comprehensive plan with the wording changes at the same planning and zoning meeting. The plan would read: Anapra neighborhood would remain residential.

If any of the residents doubted the power of their voices, they would be proven wrong. On August 21, 2018, they would see just how powerful they were. At this point, many of the community members had given testimonies and comments during the biweekly meetings. The statements and testimonies were not in vain. Their voices lead the city to prepare a presentation for the public. Sunland Park city staff gave a presentation about the Anapra stormwater pump project during a city council meeting. The presentation was a small victory but a victory none the less. It meant that city leaders were starting to listen to them. Working with Empowerment Congress, residents had been pushing for change, and it looked like the walls were finally moving.

Whether we are advocating for social change, justice, fundamental human rights, and our right to live our lives, whatever we are fighting, for one thing, remains constant, individuals’ and communities’ ability to use their voices. It may seem like a simple thing to do, but the reality is many of us don’t know how or when to use it. Humans have learned the value of community and community voice. We understand that one individual voice is strong, but the voice of many is powerful. It can break barriers, move mountains, bring rain during a drought, and heal the most significant wounds. The residents of Anapra showcased this power. There was more work Anapra needed to do, with Empowerment Congress by their side, their voices were starting to move mountains, and there was no stopping it.