Home/Community, Sunland Park/A Local David & Goliath Story: A Series Of Stories About The Fight To Keep The Community Of Anapra
Previous Next

The odds were already stacked against Anapra since its settlement. For years Anapra and its people had to battle through many obstacles, yet the community still stood tall. Anapra was a small unincorporated colonia until it joined other small unincorporated colonias in 1983. The union created the City of Sunland Park we know today. Anapra was one of the most historic colonias, according to Rose Garcia, the executive director at Tierra Del Sol Housing Corporation. She told Kent Patterson in 2012, for a documentary Hidden Histories of Sunland Park, that she was part of the effort in the early ’80s to incorporate Sunland Park. She and other team members went door to door and asked community members what they needed. Many of them needed improvements in infrastructure and utilities. The living conditions in the community for the residents were awful. Many didn’t have running water or sewage. Another issue that served to be a big problem was stormwater flooding.

The small community of Anapra is close to the Rio Grande and sits below the water table. These two factors make flooding a significant concern to the community. Since the early years of the incorporation of Sunland Park, many people knew there was an issue with flooding. Rose Garcia went on to say in the documentary that the first strategy was to evacuate the community. Still, many community members fought against the evacuation, stating that although they didn’t have much, this was their home, this was their land. They stood firm on that ground asking the State and other leaders to find solutions to fix the flooding problem while preserving the community. The State installed runoff ponds by Mount Cristo Rey to absorb excess water, and they paved concave roads for drainage. Although the state gave Anapra these solutions, they were not enough. Since then, the community has had to struggle with these problems independently. The city of Sunland Park did not listen to the community voices, and even if elected leaders did hear them, they tried to pacify them with temporary solutions and hoped that would be enough.

For many years Sunland Park City Council and City staff knew about the flooding problems in Anapra; in November 2017, the City Council asked City staff to look into the possibility of relocating residents. The City Council believed  installing a new stormwater pump would be too costly, and they didn’t see any profit from that solution. They also stated that they thought the land in Anapra was too toxic and harmful to residents and the best solution was to relocate the people and sell the land. Relocating was cause for significant concern for Anapra residents. Many residents are low-income and have made many sacrifices to stay on their land and homes. 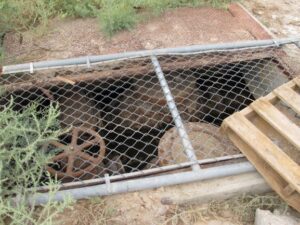 On March 10th, 2018, two community leaders and residents of Anapra had their voices reach the Empowerment Congress of Dona Ana. Maria Burciaga and Lorenzo Villescas are lifelong residents of Anapra and have become leaders in their community. They were very concerned about the community’s state, discussed the neighborhood’s needs, and sought assistance from Empowerment Congress. They informed the Empowerment Congress team that once a stormwater pump in the area addressed flooding. Damage caused the pump to be non-operational. When there was heavy rain, the pump would overflow and flood the neighboring streets. The most recent storm flooding was so bad that the water would reach up to their knees, and the local police station would have to come out and shut down the roads and told residents they could not leave their homes. The Empowerment Congress team agreed to support Maria Burciaga, Lorenzo Villescas, and the community of Anapra to advocate for a new stormwater pump in the neighborhood and prevent the City of Sunland Park from relocating the community. At the same time, the City would profit off the sale of residents’ land.

On April 10th, 2018, the Empowerment Congress team and community members attended a city public meeting. At this meeting, the engineering and architectural firm Wilson & Company presented their plans for potential land usage laid out in the comprehensive plan, Vision 2040. Wilson & Company provide services like planning, surveying, mapping, and construction management to companies, municipalities, and other government agencies. As the firm presented maps and mock-ups of potential land usage, Lorenzo noticed that Wilson & Company’s mock-ups had the neighborhood of Anapra covered in green. This arrangement seemed very odd. Lorenzo asked the engineers and architects from Wilson & Company why the Anapra neighborhood was green and what it meant. Wilson & Company told Lorenzo that the green coding represented the potential land usage for creating public parks; with much concern, Lorenzo exclaimed that the green coded area was the entire neighborhood of Anapra. It had dawned on the community members that the City was seriously considering relocating them and turning their beloved neighborhood into a public park. The relocation did not sit well with the community. They conveyed their disapproval of the plan and demanded the city to consider getting a new stormwater pump, which would allow the residents to stay in their peaceful, beloved, quiet neighborhood.

After that public meeting, the Empowerment Congress team and other Anapra community leaders and members started meeting at Maria’s house to organize and plan for the upcoming obstacles ahead. This team began to meet regularly, discussing with other residents about what they needed and how they were going to get those needs satisfied. The residents of Anapra were committed to fighting for community needs and demanding their elected leaders listen to what their voices were saying. They established two essential goals: the first was to advocate for a new stormwater pump for their neighborhood. The second was to advocate for their community to remain residential in the City’s comprehensive plan, Vision 2040. 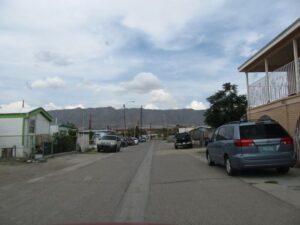 Organizing was just the beginning of the road that Anapra had ahead of it. It is reasonable and understandable for the residents of Anapra to be upset and exhausted from being ignored by elected leaders. They are supposed to be there to listen and provide for their communities and residents’ needs. More often than not, though, these communities and residents are left unseen, unheard, and pushed to the side unless there is an immediate profit to be made. It is reasonable and understandable for the residents to feel a strong connection to their neighborhood, land, and homes. Hard-working people built the area off their backs while defying all the odds and never dropping their heads. This community was built by Hispanics, who value their work and take pride in their creation. The relocation and stormwater flooding issue was a Goliath many of the residents had been battling for years. Still, this time, it felt different, maybe because there is power in a community that holds each other up and isn’t afraid to run into battle together to fight for their rights and needs.

This has been part one of this series. Be on the lookout for part two to continue reading about the story to keep the community of Anapra. We will post part two very soon! Thank you.